These 4 smartphones of Oppo under 10 thousand rupees have a lot of power, see price and special ...

Meizu 18 Series Mobiles to be launched next week, including Superfast Charging

These 7 smart phones from Samsung, Xiaomi to Motorola are up to 20 thousand rupees ...

Apple Smart Glass will be launched soon, glass will be cleared automatically on speaking, see Fei ...

Facebook BARS app to compete with Tik Tok, rappers will be able to make rap videos

If Gmail is full, store data in Google One, learn what and how to do ...

Now people below 18 years were not able to watch on Netflix-Amazon and other OTT platforms ...

5 features of WhatsApp that changed the world of messaging

Nokia is going to launch great earphones in India soon, these certification sites have ...

This is the price of this smartphone
The Samsung Galaxy F62 smartphone has an initial price of Rs 23,999. This price is of variants with 6 GB RAM and 128 GB storage. At the same time, the variant of Samsung Galaxy F62 smartphone with 8 GB RAM and 128 GB storage is priced at Rs 25,999. This Samsung smartphone has come in 3 color options Laser Green, Laser Blue and Laser Gray. This Samsung smartphone will be available for sale on February 22 at 12 noon at Flipkart, Reliance Digital, My Jio Retail Stores, Samsung.com and select retail stores.

Great launch offers on smartphone
Using the Flipkart Smart Upgrade Program (FSUP), customers can buy a Galaxy F62 smartphone, paying only 70% of the product’s price. After one year, customers can return the product to upgrade the latest Galaxy Series smartphones or keep the smartphone with them by paying the remaining 30% of the original price. This program is powered by Galaxy Farrier. Cashback of Rs 2500 will be available on ICICI Bank cards and EMI by purchasing this smartphone.

Also read- Jio, Airtel and Vi users how to get e-Sim, on which phones will work? Learn the complete process 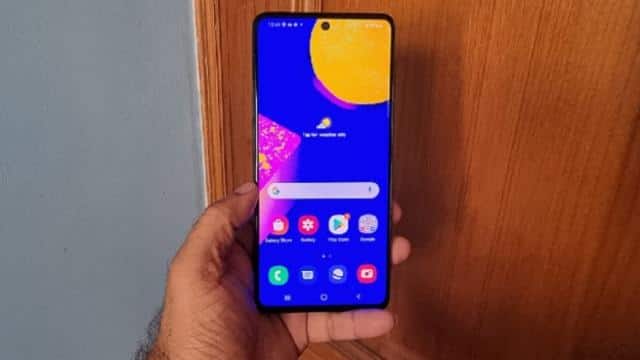 Samsung Galaxy F62 Vs M51: 7000mAh battery and same camera, know who is the best