After the fight in the game, the girls reached the police station to file a report, the police did ...

More than 8 thousand new cases of corona arrived in Maharashtra on Saturday, 51 people ...

Prime Minister Narendra Modi to do 'Mann Ki Baat' on Sunday, 74th episode in many ways ...

BJP, acting like the East India Company, did not build even one airport, sold all ...

Corona cases continue to rise in Delhi, for the fourth consecutive day from 200 ...

Uttarakhand: Rescue operation is still going on, for investigation in the lake made after the accident ...

Furore over the killing in Telangana: Slaughter in confessing the crime of killing a murderer ...

Barmer
In Rajasthan, ATM and petrol-pump robbery cases continue to be reported. After the quota, the case of petrol pump robbery has come up in the border district of Barmer on the Indo-Pak border. Here, we have tried to carry out robbery on the basis of illegal weapons. The latest case is of Thob village in Pachpadra police station area. Late in the night, two masked youth attacked a petrol pump with the intention of looting. Armed youths entered the office of the petrol pump and attacked two sleeping personnel and also injured a person with a knife. Threatened at gunpoint.

Workers created noise, then the crooks ran
It is being told that during the incident, Karmiko made a noise while protesting against the masked robbers. This led to the masked escape from the spot. However the masked thieves failed in the robbery. The entire incident has been captured in the petrol pump CCTV camera. Pachpadra police station reached the spot on the information of the incident. Checked the chance of a petrol pump. Simultaneously, a case has been registered against unknown assailants who have come from loot.

Armed maskers attacked
Personnel of Petrolpump Lumbharam said that they were attacked by armed masked men who came riding on bikes late on Sunday night. Mirchi was also hit in the eye of a person and injured him with a knife. When the noise was made in the rescue, the masked escaped from the scene. The police have started looking for the masked thieves based on CCTV footage. 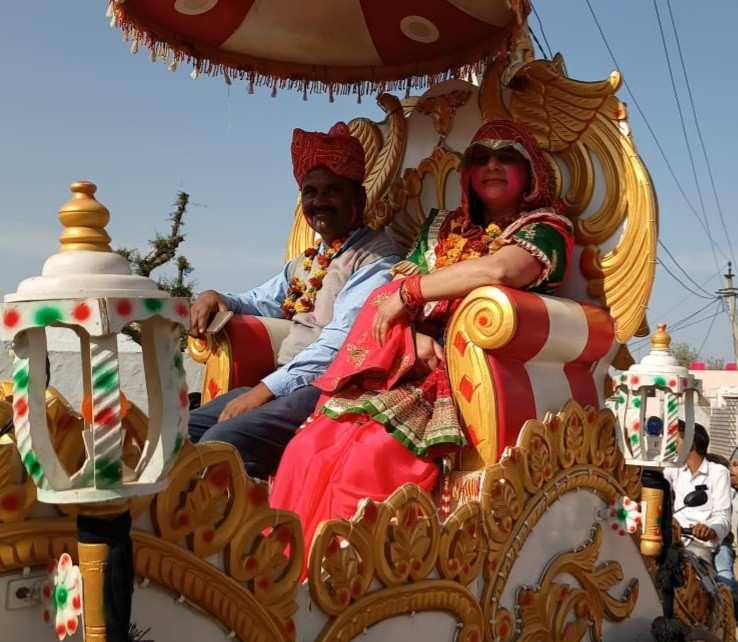 The daughter-in-law of the village, who became the chairman of Chidawa Municipality, was welcomed in royal style, reached the village by sitting on the wagon

Injured worker’s condition stable
According to the information received, the police has formed different teams and started searching for the accused. At the same time, the condition of injured personnel Lumbharam is said to be stable. On the other hand, according to Barmer Superintendent of Police Anand Sharma, the police are scrambling from place to place in search of masked men. Efforts are being made to identify and seize on the basis of CCTV footage.

Acharya Pramod Krishnam, furious over the neglect of Sachin Pilot in Rajasthan, said – this question is for the future of Congress

‘If I complain against me, I will get suicide’, Chairman of BMC Standing Committee …

Wherever the seed of the country is, it should be destroyed completely: Anil Vij

Rakesh Tikait will visit five states in March, will mobilize for the farmers’ movement …

Protesting farmers are being treated like … they are enemies of the country: P. Chi …